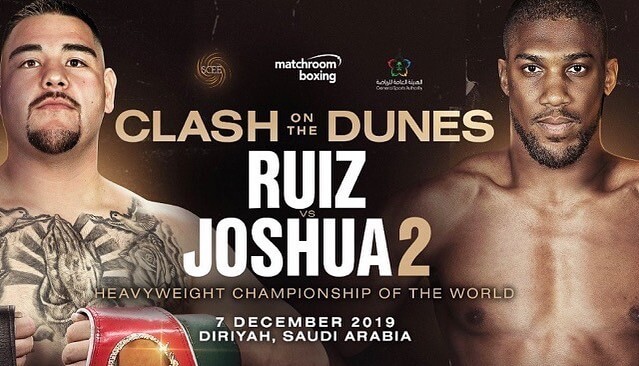 Anthony Joshua to take on Andy Ruiz in Riyadh

Boxing fans will receive the second instalment of high-octane action when Anthony Joshua will take on Andy Ruiz Jr in a rematch this Saturday, the 7th of December in Riyadh, Saudi Arabia. Much will be at stake and Joshua will have something to get off his chest as he is set to exact his revenge on Ruiz and regain the WBA, IBF and WBO heavyweight titles. Ruiz Jr sent the World Heavyweight Champion to the canvas four times en-route to a seventh-round stoppage at Madison Square Garden in June to hand the Briton his first professional defeat.

AJ has since then focused on his training routine and made drastic changes. When asked about the modifications his gym had undergone in a recent interview in Sheffield, the former champion responded that he has taken to a high-intensity training schedule that places emphasis on boxing skills and drills. This was confirmed during his open workout on Tuesday which he looked slimmer and quicker, while his opponent was seen to still be carrying plenty of flab. AJ’s promoter Eddie Hearn later told the Guardian that AJ will weigh in more than half a stone lighter than he did in June, saying that AJ has been watching his diet and not pumping weights.
AJ looked highly confident of annihilating any opponent who comes between him and his way to restoring punters’ faith that was shaken in June and he is only a step to regain his championship. Ruiz could have shockingly won but he is not as experienced and will struggle against Joshua, who has incredible ability to make a come back.

Punters who are looking for boosted odds and higher winnings should look no further. You can find it on 888sport, they will offer increased odds of 6/1 for new customers
Follow steps given below to receive increased odds: