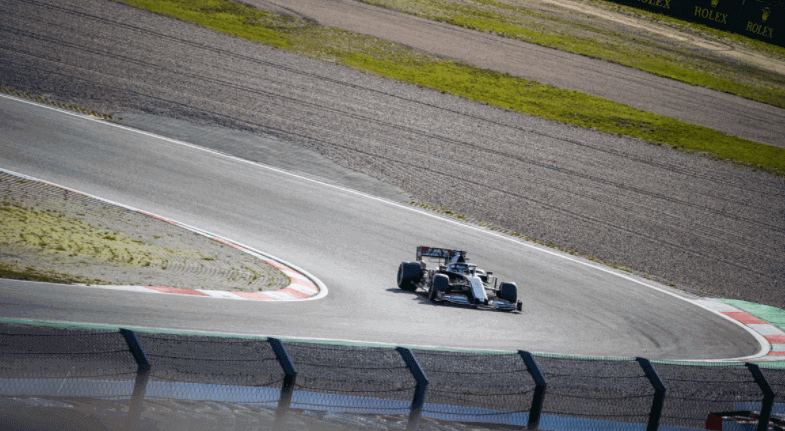 Although it might feel that F1 is becoming a bit too predictable this season (i.e. Max Verstappen winning every single race), we’ve still got a contest to watch, and that’s one of the most interesting on the Formula One calendar: The Singapore GP in 2022.

Before we discuss the Singapore Grand Prix, let’s quickly recap what happened during the last race in Italy.

Well, yes, Max Verstappen in the Red Bull won his fifth race in a row, but he did work his tail off for it. The Flying Dutchman started from seventh on the grid, but a phenomenal mix of brilliant driving and clever team tactics meant that Verstappen finished the race in first place.

That said, it was a bit of a strange ending, as Verstappen won under a yellow flag when workers had to clear Daniel Ricciardo’s McLaren from the track late in the race.

As a result, no overtaking was allowed under Safety Car rules, and Verstappen literally cruised his way to the finish line ahead of Charles Leclerc and George Russell. Amazingly, this was Verstappen’s first-ever victory in Italy.

Despite not making the podium, we also saw great driving from Carlos Sainz in fourth and Lewis Hamilton in fifth. It was another disappointing end for Sebastian Vettel in the Aston Martin, who couldn’t finish the race due to car failure, but perhaps he’ll get a podium spot at least once in his last season.

Venue, time, & where to watch the F1 Singapore Grand Prix

The Singapore GP in 2022 will take place at the Marina Bay Street Circuit on Sunday 2nd October. UK viewers can watch the racing action at 13:00 on Sky Sports F1 (check the full racing schedule below).

Singapore has hosted one of the finest races in the F1 schedule since 2008, not least because of the incredible skyline, but because it was the first to be a nighttime race under floodlights.

This particular race under lights is pretty to look at, but also performed because of the incredibly hot and humid temperatures during the daytime in Singapore. Not that the night is much better, but it’s at least somewhat more manageable for the drivers.

As for the circuit itself, it’s physically challenging because of the rough street surface, and of course the humidity. The drivers can’t relax for a second, as the 23 corners mean that there’s a lot of precision to consider.

There are a few straights, but these are nowhere near as long as other tracks. F1 drivers are said to lose at least 3-5kg during the Singapore race!

Turn 18 is a fun part to look out for, as it sees the cars drive beneath a grandstand, which is rare in any F1 race.

Here are a few of the main discussions before the F1 Singapore Grand Prix in 2022.

Verstappen could wrap up the 2022 title

There’s a lot of chatter this weekend that Verstappen may, in theory, win the 2022 F1 championship if he takes first place. This is certainly possible, but it also hinges on Leclerc, Russell, and Perez all having a shocking race without scoring any points.

You can bet everything that Ferrari will do all it can to prevent Red Bull and Verstappen from claiming the title this early in the year. Not that you can be mad at Red Bull for being this good, but it’s a shame for F1 fans that things aren’t closer with a more exciting finish like in 2021.

It would be a big surprise if Verstappen does win the title in Singapore, but keep an eye out for it anyway.

As we didn’t get to see the Singapore race in either 2020 or 2021, we’re more than excited to witness the original nighttime contest back in all its glory. The twisty street circuit in such humidity always makes for intense racing and some great drama.

The drivers really earn their paychecks in Singapore, as the bumpy track and extreme downforce are not kind to their bodies, but it’s normal to make extra training preparations before the Singapore race begins.

Air temperatures of 30°C and 80% humidity are fairly normal in Singapore, and if you feel hot in your T-shirt and shorts, imagine what the drivers are feeling in the car cockpit with their thick race suits, fireproof clothing, balaclava, and helmet – not fun.

Many drivers train in saunas, some even with an exercise bike, before the race in Singapore to help acclimatise their bodies to the heat and amount of sweating. Other drivers wear more layers of clothing when training to simulate the uncomfortable heat that they’ll experience in the Singapore GP.

“There is a time where you are actually praying for the Safety Car, a bit of a cooldown, because it’s really demanding; the last 20 laps or so is mentally really tough,” said Red Bull driver, Sergio Perez. “It just keeps getting worse and worse. After Lap 15 it’s already pretty warm – and it just gets worse from there!”

Predicted outcome for the Singapore GP in 2022

Although much has been said about the Singapore heat, there have been weather reports of thundery showers on Sunday. A 60% chance of rain is forecasted, which hopefully doesn’t happen (maybe the drivers are happy) because rain always makes chaos at a Formula One race.

As for which driver can win the Singapore GP, it’s hard not to direct attention straight to Verstappen. He’s simply a well-oiled machine at this point and there’s seemingly nothing to hold him back from winning his sixth straight race.

However, we don’t believe that he’s going to wrap up the F1 championship just yet, as there’s a feeling that Lewis Hamilton (who has won at Singapore four times) and Mercedes have a good shot at second place.

Ferrari, despite recent troubles, still looks formidable and has the car and drivers to reach third place, with Leclerc most likely to take the last podium spot.

Verstappen has 11 victories this season, but has only reached pole position four times. This goes to show just how fast Red Bull has become, that Verstappen can win from virtually any position on the grid. In fact, he did win the Belgian GP from 14th place!

Nearly every team has boasted that their car will be better and more competitive in the 2023 season, so long as more rule changes don’t affect the chassis as much as this time around! The talking is always done on the track, however, and so far Red Bull has been just dominant all year.