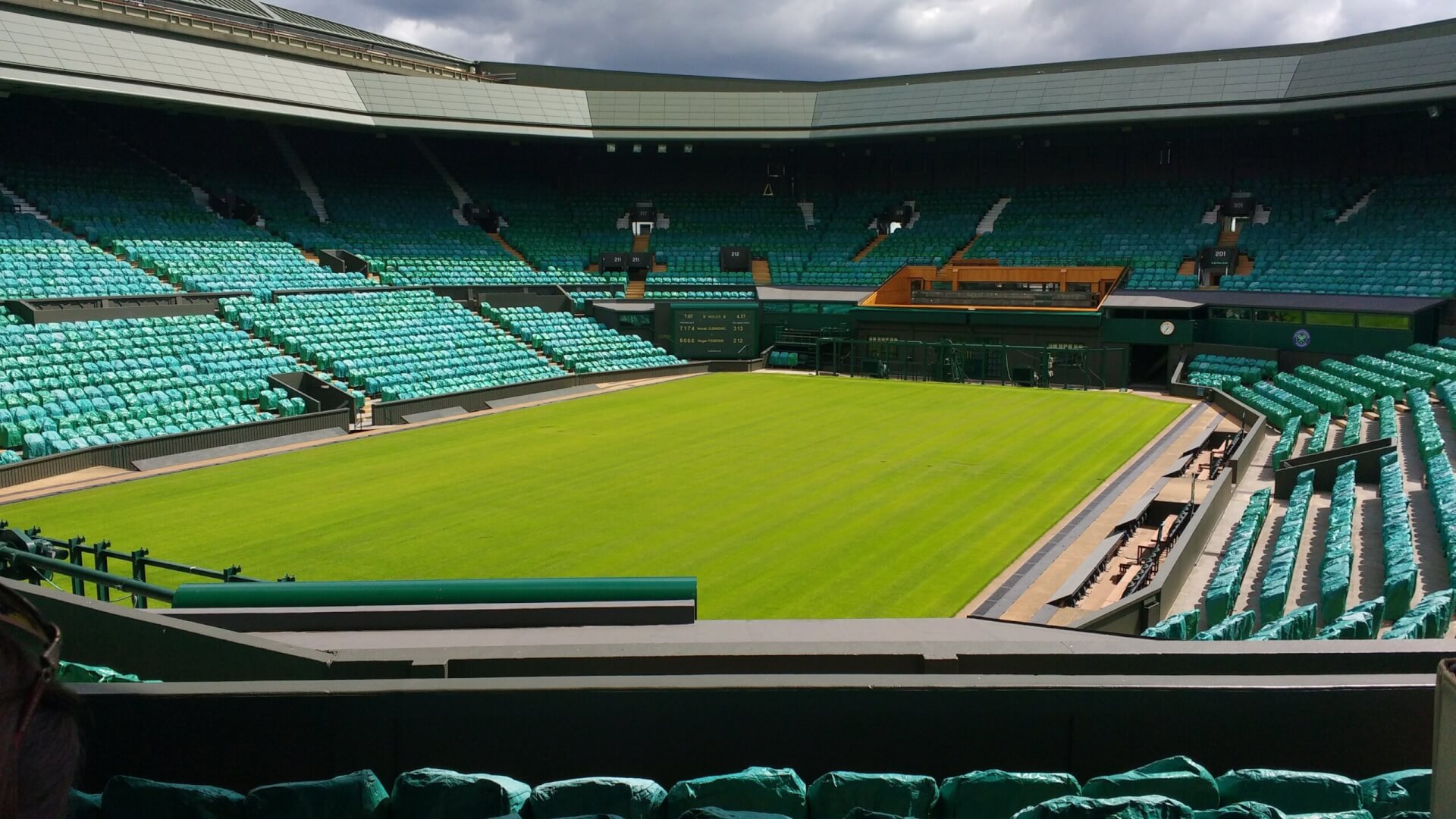 It’s that time of year again, where the sporting world turns their eyes to London for the biggest competition in tennis. The Wimbledon Championships. There are many things that make this competition so iconic, the grass courts, the white dress code and the general buzz around the area.

The British summer sets quite the scene for this competition, when the weather complies… as we all know, Great Britain has remarkably unpredictable weather.

We’ve seen matches be postponed due to this, leaving results undetermined for long periods of time. This has raised question marks over potential usage of the retractable roof on centre court. The roof’s first appearance came in 2009, it certainly divides opinion. That being said, I’m sure the players like it. The roof takes around 10 minutes to emerge, giving them some decent rest!

The roof is reported to have cost around £80million! Would you like to see it in action more often during games? Or does it tarnish the integrity of the competition?

There’s always a story at Wimbledon to really get pluck at your heartstrings, this year that award goes to Katie Boulter. Shortly after her first round victory against Clara Burel she learned that her Grandmother had passed away.

She managed to keep her head up and win her second round match against Karolina Pliskova, which was followed by an emotional post match interview in which she dedicated her victory to her late Grandmother.

Boulter had trained hard to get to where she was, as she suffered a major back injury that had sidelined her for around 9 months.

Her win against Pliskova on Centre Court took her to her first third round at Wimbledon where she’d face Harmony Tan. The whole of Britain was behind her, but unfortunately the power of the Tan was simply too much, the emotional weight carried by Boulter after her loss also came into account.

She admitted that she saw it coming and felt that she had reached her physical and emotional peak in the warmup. It’s definitely a tough one to take for her, but her career is just beginning and she will most definitely be back.

Scotsman Andy Murray has very much passed his prime, he hasn’t reached the final of a major Grand Slam for 6 years now with 2016 being the peak of the Scot’s powers.

That year was very special for him as he won the Wimbledon Championships as well as reaching the final of the French Open and Australian Open.

He also won gold at the Rio De Janeiro Olympics that year and finished as world number 1, spending a total of 41 weeks on top.

Since then, we haven’t seen the same Andy Murray. He has suffered with hip problems which forced him to withdraw from the US Open in August 2018. He tried and tried to avoid having surgery and stayed off the court until he announced the Brisbane International as his second comeback attempt.

He ended up pulling out on the eve of his first game, resulting in him undergoing hip surgery. 6 months later, Murray announced he would make his comeback at Queen’s Club. After almost a year out, Murray lost in the first round against Nick Kyrgios.

Since then he has been in and out tournaments, missing a fair few but his fighting spirit has allowed him to continue playing. He came into Wimbledon 2022 with Great Britain behind him, but his advances were halted by John Isner in the second round on centre court. Isner was excellent on the day hitting 36 aces.

The American is known for his fantastic serving ability and holds many records. Including the most aces in a game (113). This feat came during the longest ever match in tennis history.

Novak Djokovic- The Serbian has been up to his usual tricks at Wimbledon, performing at an exceptional level. He has lost just one set so far at the competition, thus coming against Kwon Soon-Woo in the first round. His most impressive victory came against compatriot Miomir Kecmanovic (6-0, 6-3, 6-4). He remains the favourite to win the competition.

Rafael Nadal- Rafa continues to prove that class is permanent as he sweeps by his opponents so far. The king of clay has everything to play for as he looks to win his third Wimbledon title. He swept aside Lorenzo Sonego to book a place in the round of 16.

Simona Halep- Halep is now second favourite to win the competition after some inspired performances. She beat Karolina Muchova in the first round, edged past Kirsten Flipkens in the second round in what was an amazing performance. She faced Magdalena Frech in the third round and didn’t struggle to sweep her aside in two sets.

Ons Jabeur- World number 2, Ons Jabeur has performed splendidly throughout the course of the year and her Wimbledon campaign has been no exception to this. She has already booked her place in the quarter finals where she’ll face Marie Bouskova.

Amanda Anisimova and Harmony Tan- The two will meet in the round of 16 on court 1. They have both performed excellently in the competition so far and could go all the way. Tan beat Katie Boulter in the previous round and lost  just two games out of 16. While Anisimova (ranked 25th) beat world number 12 Coco Gauff who was previously one of the favourites!

We are almost at the quarter final stage of this years’ Wimbledon Championships. Let’s take a look at the confirmed matchups:

David Goffin beat American Frances Tiafoe in the round of 16, in a 5 set thriller on court 2. It was a very close affair, with both men performing very well. Tiafoe won sets 2 and 3 but couldn’t take home the victory in the fourth. Goffin simply didn’t give in, he knew he was down, but not out.

Brit, Cameron Norrie has performed excellently on his home turf this campaign. His last two victories came against American opponents, both in straight sets. His last 16 game against Tommy Paul was very close, but on this occasion is was a Briton defeating an American.

Novak Djokovic has been excellent as usual throughout this competition and is the heavy favourite to go all the way. His style will be tested as he faces Italian, Jannik Sinner who has also performed very well.

The pair have faced each other just once before, this came last year in the ATP Masters 1000 in Monte Carlo. It was the Serbian who won on this occasion, in straight sets (6-4, 6-2). Can Djokovic continue his form and go through to the semis? Or will Jannik Sinner squash the giant?

It’s the battle of the Germans! Tatjana Maria faces Jule Niemeier. Both searching for their first Wimbledon win. Maria’s previous outing saw her face Jelena Ostapenko in what was a great match of tennis. She lost the first game 7-5, but won the next two 7-5, 7-5! It was a great match between great competitors, but Maria was a worthy victor in the end.

Compatriot Niemeier had a slightly easier previous game, she made quick work of Heather Watson, winning in straight sets, 6-4 and 6-2. It hasn’t been the greatest showing from the Brits at this competition.

The other confirmed quarter final sees world number 2 Ons Jabeur of Tunisia face Marie Bouzkova. Ons has been incredible at this competition. Winning every match she’s played so far in straight sets. She is the bookies favourite to go all the way. Bouzkova has a real job on her hands to stop the Tunisian tennis machine.

I can see Djokovic, Goffin, Jabeur and Niemeier all progressing to the semis, in emphatic fashion. I think the only potential spanner in the works is Cameron Norrie, one of the final Brits to still remain in the competition. But he will suffer a similar fate that his compatriots have and crash out.


Where to watch Wimbledon live on TV in the UK

Wimbledon is broadcasted across the UK completely free by the BBC!