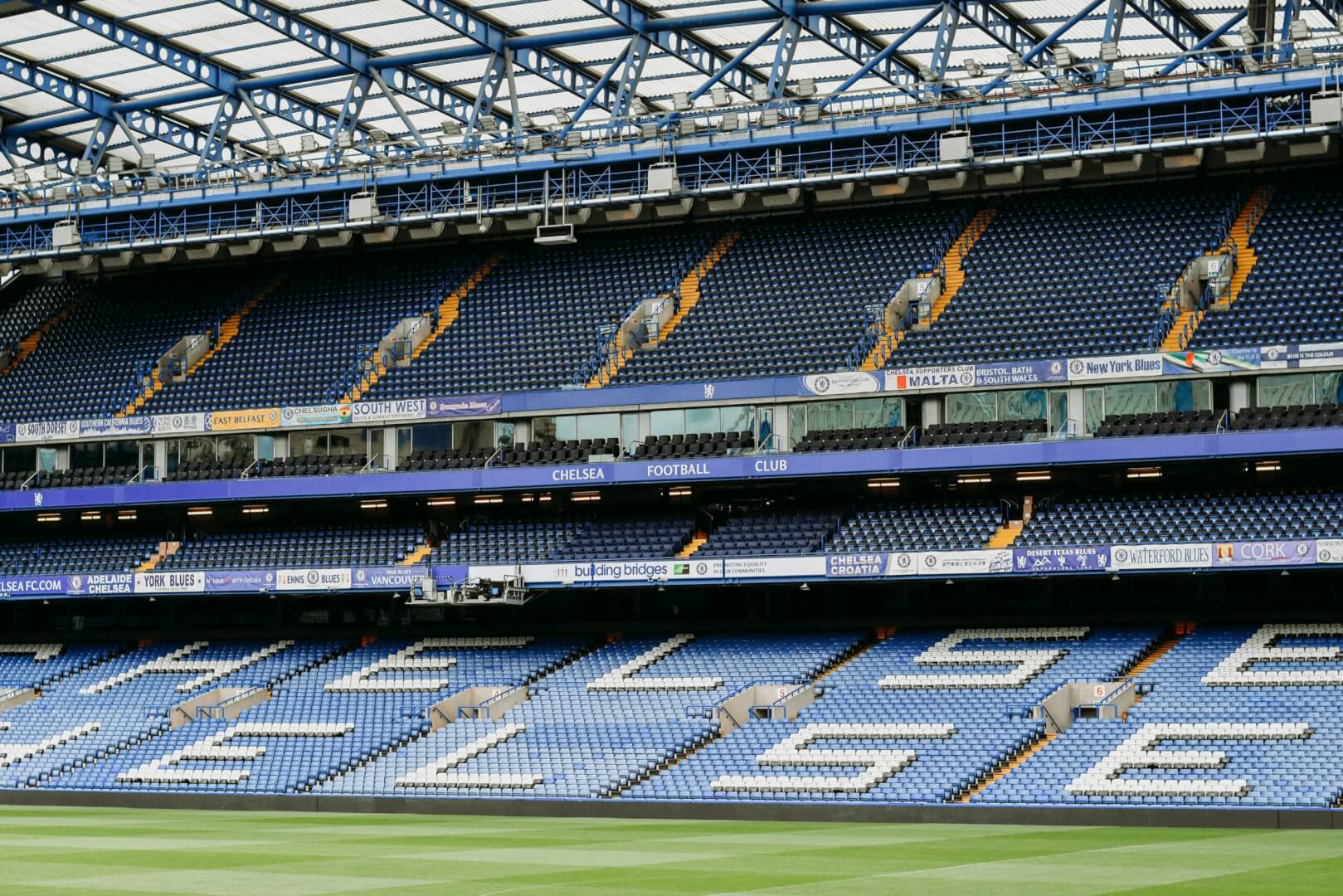 Photo By: Virginia Marinova on Unsplash

Chelsea FC: What Does the Future Hold for the West London Club?

Since the first of July 2003, Chelsea have been a force to be reckoned with in English and European football. The reason? One man, Roman Abramovich. A Russian-Israeli billionaire who had a dream. To take little Chelsea to the top of football.

A dream that was soon fulfilled, as the next 19 years has seen Chelsea win 19 trophies, averaging a trophy a season. Chelsea truly showed the world the power of money in football. But now the drip has finally stopped, and it seems that some dark days could be ahead for Chelsea.

Before we get into why, let’s reminisce on some of the club’s greatest achievements during the Abramovich era.

In 2004 Chelsea appointed Jose Mourinho as manager. This came after Jose led Porto to their second European Cup. Against the odds, Jose took a group of relatively unknowns to becoming Champions of Europe. Seeing this, Roman and Chelsea decided they wanted a bit of that and lured the Portuguese to Stamford Bridge.

In his three-year first stint at the club, he won the Premier League two seasons running. Chelsea’s first Premier League titles. He created a formidable side that kept Sir Alex Ferguson’s Man United and Arsene Wenger’s Arsenal at bay. In his third season at the club, Chelsea won both the League Cup and FA Cup. Jose then departed the club in the early stages of his fourth season, leaving a magnificent legacy behind. One that will never be forgotten.

That night in Munich

Chelsea’s domestic success had not translated into Europe until the year of 2012. In 2008 they came close to their first UEFA Champions League triumph, but were unable to get over the finish line. They went on to lose on penalties to Manchester United in Roman’s homeland of Russia.

In 2012, they set out to do what they couldn’t four years prior and finally win the Champions League. They qualified for the final in dramatic fashion, beating Barcelona (the holders at the time) over two legs, with £50 million man, Fernando Torres scoring a late goal.

This took them once again, to the promise land. The Champions League final. The job was unfinished. Chelsea faced FC Bayern at the Allianz Arena and the aim was clear. Win the game at all costs. They looked down after Thomas Muller scored late, but in the 88th minute, who else but Didier Drogba scored to send it to extra-time. The sides couldn’t be split, and it went to pens. It was Chelsea’s striker who once again came up clutch, scoring the winning pen past Manuel Neuer, to beat Bayern in their own backyard.

‘Kai Havertz is the best on Earth!’

Nine years on and several managers later, Chelsea were once again challenging for the Champions League. Frank Lampard was the boss at the start of the season, but Thomas Tuchel took over and took Chelsea to the next level again. After a massive spree of spending in the transfer window, failure to win a trophy simply wasn’t an option.

Chelsea swept aside both Atletico and Real Madrid as well as Porto to reach their first UCL final since 2012. But their toughest test would be finding a way to dismantle Pep Guardiola’s Manchester City who were and still are desperate to win Europe’s most elite competition.

The difference maker in the final was Chelsea’s then record signing, Kai Havertz. The young German international had an extremely slow start to life at Stamford Bridge and the £70 million they stumped for him was beginning to be questioned.

The then 21-year-old, silenced the doubters in the best way possible, scoring the winner as Chelsea squeezed past City 1-0. Two German’s cemented themselves in Chelsea folklore that night. Kai Havertz and the manager Thomas Tuchel.

It’s fair to say Roman’s Chelsea tenure has been a great success and a lot of this has come down to the financial support that he has given the club. He has spent over £2.1 billion on transfers! Let’s take a look at where some of that money went:

Four of these players still play for Chelsea today, but some have been more successful than others. Despite this, it’s clear that Chelsea’s success has been down to Roman’s cheque book.

What’s next for Chelsea?

After Roman Abramovich’s links to the Putin regime in Russia were unravelled, the Russian was sanctioned by the UK Gov. This has essentially stopped Chelsea from running as a business. They are unable to trade in any way. Their club stores have been shut, fans are unable to purchase tickets and no signings or contract extensions can be made.

The sale of the club is permitted if it is ensured that Roman Abramovich makes no money from it. It has since been confirmed that Roman has given his blessing for the sale to ahead without him being involved, news that will make Chelsea fans rejoice. It is expected that the sale will go through in the next few months, to avoid the club going into administration. The price that has been set is around £4 billion. The question is, who is going to pay up?

There are a few contenders and interested parties in buying the club. Who are they and why do they want the club?

Candy has a sweet tooth in business and is hoping to add Chelsea to his growing empire. He recently spoke to a reporter, saying: ‘I’ve been a Chelsea fan since I was four’ and ‘I don’t care who acquires the club, as long as it’s in the right hands’. The billionaire has made a lot of his fortune from real estate, more recently he has diversified into more worldwide investments through his private investment fund: Candy Ventures.

There is no doubt that he’d be a good fit for Chelsea, as a life-long fan. He may not have as much of a fortune as Roman, but he’s definitely one who’d take care and put the club’s best interests at heart.

Wyss was considered a front runner to take over from Abramovich, after he revealed that he was once offered the chance to invest in the club. The Swiss is rumoured to be worth £4.3 billion. He made his fortunes from founding American medical business Synthes.

Wyss claimed that: ‘Abramovich is asking for far too much. Chelsea owe him £2 billion, but they have no money. So whoever buys the club will need to compensate Roman for this.’ Unless Abramovich lowers his asking price, it looks unlikely that Wyss will be purchasing the club.

Boehly has since expressed interest in entering a partnership with Wyss. He has had two approaches for Chelsea shot down back in 2019. He has experience in the sporting arena and is a big sports fan. He already has stakes in the LA Dodgers and Lakers. The two are now said to have partnered up with Jonathan Goldstein, a lifelong Spurs fan, and have submitted a £2.5 billion bid. Reports also suggest that they are the frontrunners as things stand.

As for the rest of this season?

It remains to be seen how Chelsea will recover this season. Their next fixture is Middlesbrough away in the FA Cup last 8. They are unable to sell tickets for the game and have requested it to be played behind closed doors.

We would be surprised if the FA allow this. Football is for the fans and Middlesbrough fans should not be caught in the crossfire and punished.

Unsurprisingly, Chelsea have withdrawn the request after backlash from supporters.

What would new ownership mean for Chelsea?

Chelsea have been owned by Abramovich since 2003 and the change in ownership would undoubtedly have a massive impact. Their one trophy a season average would most definitely fall, and they would become less of a threat.

Abramovich’s fortune has meant that Chelsea have consistent streams of income from two avenues. The club earnings and Abramovich’s own investments. They would lose a key income stream and a key figurehead at the club.

There’s a strong chance that some players and even the manager may look to jump ship due to the uncertainty. Thomas Tuchel has already been linked with Manchester United, he is now the third favourite to take over from Ralf Rangnick in the Northeast.

Homegrown talents such as Mason Mount and Reece James would be among those more likely to stay. Mount in particular bleeds blue and it would come as a big surprise to see him depart.

Out of contract players such as Antonio Rudiger and captain Cesar Azpilicueta may have no choice but to leave. The former looked likely to depart Chelsea anyway as he rejected Chelsea’s contract latest offer.

There is a strong chance that the focus of the club and how it’s run may change. We’ve seen American owners such as the Glazer and Kroenke families who are clearly more financially oriented.

Chelsea fans will hope that the new owner has the same ambition that Abramovich had, but it’s not always easy to find the right fit. Chelsea fans, brace yourselves, because it could be a while before you see glory again.