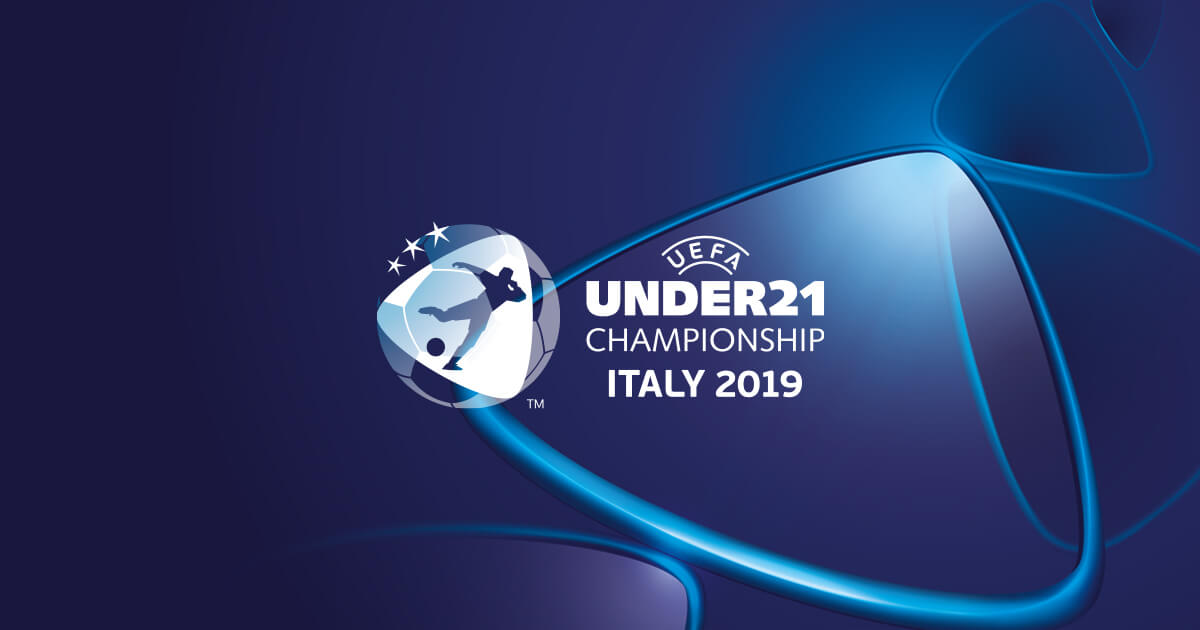 Italy and San Marino are hosting the 22nd UEFA Under-21 Euro Championships this summer. All of the top nations are involved in what looks set to be one of the most exciting finals yet. It’s a showcase of the up and coming talent across Europe and many of the top players from years gone by made their name playing in this tournament. The likes of Andrea Pirlo, Luis Figo, and Laurent Blanc all played for their under-21 national teams which set the foundation for hugely successful careers.

2019 looks set to highlight some of football’s finest talent yet again and all eyes are on the English with many of their squad already breaking into first team’s across some of Europe’s top leagues. Germany are the defending champions and they look in great form but a handful of other nations are travelling to Italy high on confidence and looking for Euro glory as well.

Here you can find dates, kick off times, channels and broadcasted fixtures list for for the Euro Under 21 Championship.

Euro U21 on TV and stream: SKY Sport and NOWTV

An Overview of the Euro U21 Championship Format

A total of 54 nations started out in the qualifying stages and we are now left with 12. The Italian hosts were given automatic qualification and the remaining 11 teams played through the qualifiers to reach the finals. This year is the first time that we’ll see 12 teams in the final, expanding from eight in 2017, and it’s also the first appearance of the new video assistant referee (VAR) technology.

The championship format consists of three groups of four teams, where each team plays each other once. The winners of each group and the best runner-up will move through to the knockout phase with two semis and the final. In addition to getting their hands on the trophy, there is another big incentive to win. The four nations who reach the knockout stage are given automatic qualification to enter the Olympic Football Tournament the following summer in 2020. You’ll be able to watch this live sport on TV and you’ll find all of the coverage details at the end of this article.

The England manager, Aidy Boothroyd, believes that the England Under-21’s are ready to step up and take the 2019 Euro championship trophy home. On current form, you can’t deny the manager’s thinking. The England boys have delivered world-class performances ever since they lost out to Germany in the Euro 2017 semi-final penalty shootout.

Boothroyd’s team stormed through the qualifiers and confirmed their place in the finals with a game still to go. After this impressive run of form and winning the Toulon Tournament for the third successive year in 2018, the team find themselves as one of the top seeds for this upcoming championship and that comes with a certain level of expectation.

You don’t often talk about experience when the Under-20s and Under-21s are concerned but this England team is different. Players like Solanke and Calvert-Lewin were a part of the winning World Cup Under-20 team and a number of first-team regulars and Premiership winners also bring invaluable experience to the squad.

This group of players are training alongside world-class footballers at club-level every day and this can only bring further positives to the team as a whole. Of course, many of the other nations can say the same thing but it’s the experience and depth to the England squad that makes them such a strong contender for the trophy this summer.

History Of The Euro Under-21 Championship

The full history of the tournament goes back to 1967 when it was initially called the Under-23 Challenge Cup. This cup format only ran for three years until 1970 and eventually, the qualifying and group format as we now know it was created in 1972.

Three tournaments were held over the next six years with Czechoslovakia, Hungary, and the Soviet Union all winning titles in what was then a two-leg final. In 1978, the age limit was reduced to 21 and has remained so ever since. For players to be eligible for the 2019 campaign, all players are required to have been born in or after 1996. Many of the players in these finals might actually be over 21 however they would have been the correct age when the qualifiers began back in 2017.

The tournament has only seen ten different winning nations with Italy coming up as the most successful team with an impressive five titles between the years of 1992 and 2004. The Spanish come next with four titles and Germany, Netherlands, England, and Russia all hold two titles to their name.

You need to rewind back to the 1980s to find England’s last win with back to back titles in 1982 and 1984. Recent history favours the German and Spanish teams but we can see the tables turning this summer as new talents are emerging with England, Denmark, and France all looking like potential winners.

If you look at the recent stats of the Euro’s then you’ll quickly realise that the Spanish and German teams have dominated the last decade. These two nations always seem to produce top-class players and they’ll be looking to add to their impressive list of titles this summer. In fact, the Spanish have dominated the individual Golden Boot and Golden Player trophies as well with six winners in the last decade. The likes of Juan Mata, Thiago, and Dani Ceballos picking up the player of the tournament and Adrián, Álvaro Morata, and Saúl picking up the top goalscorer awards.

The official Euro Under-21 Dream Team was announced in 2015 and this shows the true class of the host nation, Italy. Giorgio Chiellini, Alessandro Nesta, Andrea Pirlo, and Francesco Totti all made the final team and these names are now considered legends of Italian football.

The Under 21s are riding high on a wave of confidence and the surge in talent coming through the ranks has been improving year on year. There is a general feeling across the nation that their recent successes will come together and they’ll finally bring that trophy back home. It’s not going to be an easy journey though as the England boys find themselves in a group alongside France, Romania, and Croatia.

Squad depth is going to be a key factor in reaching the latter stages of the tournament and this is England’s strong point. It’s a team bursting with talent and Boothroyd admitted that it was a struggle to fit all of England’s best young players into a 23-man squad.

However, he has a lot of Premiership quality with the likes of Phil Foden and James Maddison to build the team around. England are big contenders to win the trophy and it’s been 35 years since they were last crowned champions. Summer 2019 is as good a time as any to mount that challenge and officially become Europe’s best up and coming talent.

England’s Matches for the UEFA 2019

England will play at least three group stage matches between the 18th and 24th of June. If they win the group or end up as best third-placed position then they’ll progress to the knockout stages to play a semi-final in either Bologna or Reggio Emilia. The last and fifth game will be the grand final played in Udine on the 30th of June.

Italy might be a little too far for some people to travel but worry not, for we’ve got all the broadcast details so you can watch the football on TV or stream online. You can’t beat watching a live match in the stadium but sometimes it’s just not possible. Using our live sports on TV guide below will let you catch the games at times that best suit you. If you ever struggle to find a suitable channel then you can search online for “live football on TV today” and this should give you enough details to find what you are looking for.

Euro U21 Championship Live Football on TV: If you’re looking for live football on tv fixtures then Sky Sports is the place to go. Sky has the exclusive rights to broadcast UEFA sports on TV so this is the best option for the UK viewers.

Sky requires a paid subscription and there won’t be any free live football on TV deals on offer, unfortunately. Other alternatives for watching sport on TV will be through RTE in the Republic of Ireland and ESPN in the USA. You can head over to the official UEFA page to view the full coverage listings for countries across the world.

Euro U21 Championship Online Streaming: SKY GO will have their own online TV sports guide. You’ll be able to stream and catch up on all of the English football on TV that you might have missed via your tablet, smartphone, and laptop devices.