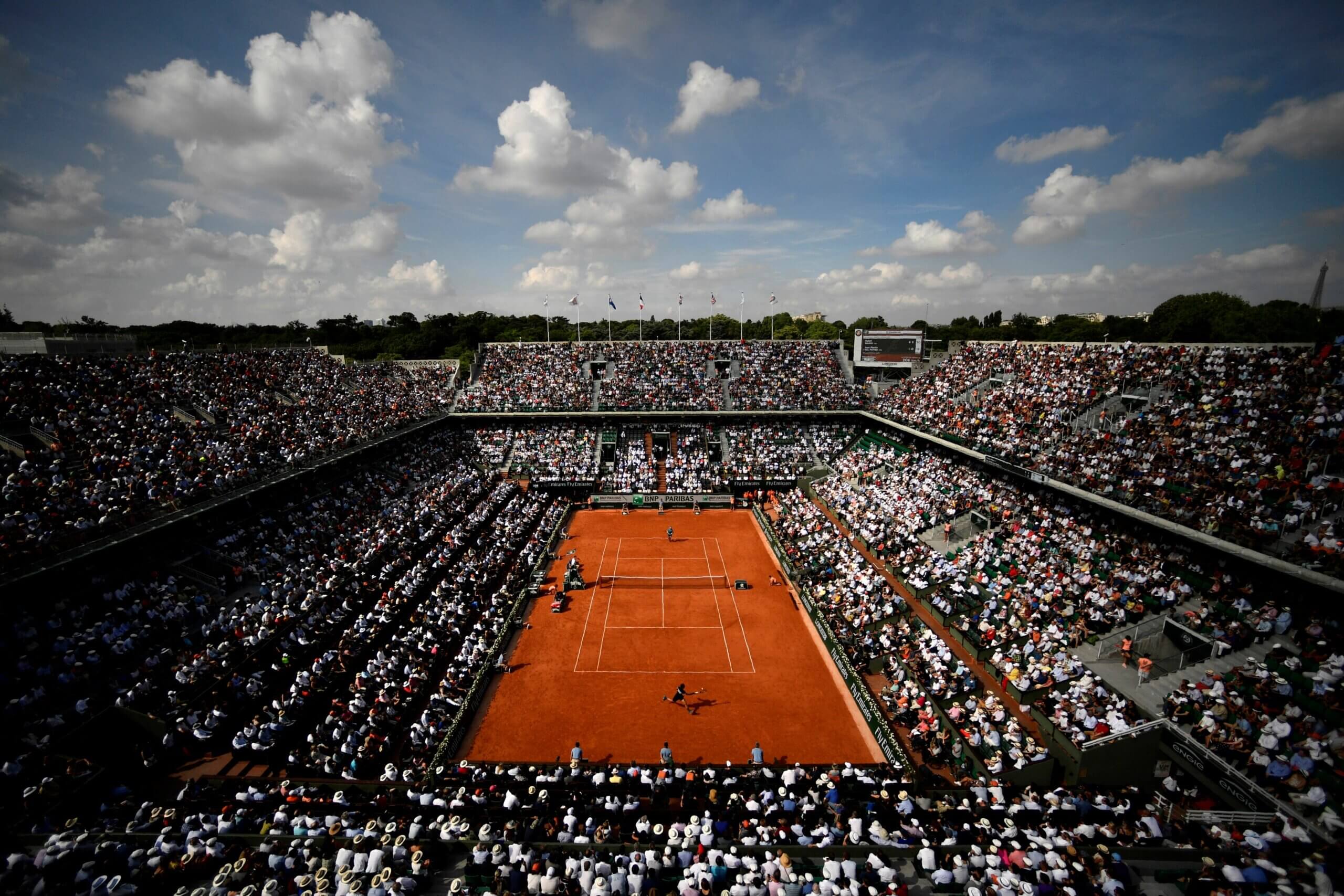 Welcome to the highlight of the clay-court tennis season – the French Open 2021. The 120th edition of the event will be played from 24 May, one week later than originally planned.

The favourites to reach the final on 13 June are “king of clay” Rafael Nadal and world number one Novak Djokovic. The two giants of tennis, who have recently met in the final of the Italian Open. Due to the draw, they could clash in the semi-finals of Roland Garros 2021 already. Andy Murray pulled out of the event.

Eurosport and ITV hold the TV rights for Roland Garros 2021 in the UK. Follow our TV guide for all information about the broadcasts from Paris.

Up to 13,000 spectators from the quarters

The 2020 edition was moved from May to September due to the Corona pandemic. This year, the final date for the tournament has only been rescheduled by one week.

🙌 The Roland-Garros tournament will have the privilege of being France’s first sporting event to welcome back spectators this spring.

Spectator numbers, health and safety protocols, night sessions: we tell you everything you need to know! ↘️

Hence, the qualifying tournament will start on 24 May. The main round kicks off 6 days later on 30 May. France’s Sports Minister Jean-Michel Blanquer announced that a maximum of 5,338 spectators per match would be allowed for the first rounds.

As to right now, the pandemic situation would allow 13,146 tennis-loving fans to enter the arenas of Paris from the quarter-finals on 9 May. In the evening hours, things will be different. The curfew, which is currently set between 9 p.m. and 6 a.m. in France, will be pushed back to 11 p.m. from May 9. Until then, the evening matches will be played without fans, while 5,000 spectators will be allowed from 9 June.

There were some bad news ahead of the start of the tournament, as Andy Murray pulls out of the French Open.

Andy Murray will not play in the French Open after deciding to focus on the grass-court season instead.

The Brit, currently ranked only 123 in the world, had not been guaranteed a wild card by the organizers beforehand. Accordingly, the three-time Grand Slam winner would have had to get through the qualifying tournament, in order to find his name in the main draw from 30 May.

However, after feeling some discomfort during the doubles in Rome, he decided to renounce all his ambitions for the clay season and focus on Wimbedon instead. Murray had already missed the Australian Open due to an infection with Covid-19. The 33-year-old has not been able to replicate the form of earlier days after the onset of a metal hip in 2019. Most recently, groin problems also added to the problem. As a result, the 2016 finalist is considering to end his professional career.

On the other hand, Roger Federer had already announced in April that he would be playing in Paris. The Swiss made his comeback in Qatar at the beginning of March after his knee operation and 13 months of absence from the tennis court. After the defeat to Basilashvili in the quarter-finals, he had decided to focus on his training again.

On 16 May, he will make his next comeback at the Geneva Open and put the finishing touches on his first Grand Slam appearance since the Australian Open in 2020.

Will Nadal succeed with his 14th strike?

Beside the good news of him competing on the highest level again, it is highly doubtful whether Federer will be able to compete for victory at the French Open in 2021. Things look very different for the “King of Clay”, however. Rafael Nadal wants his 14th title at Roland Garros – as well as the sole record for the most Grand Slams won. He is currently tied with Federer (20 majors).

The omens are good, as always. At the Italian Open, the ATP Masters in Rome, a week before the start of Roland Garros, Nadal was able to claim his tenth triumph overall after winning in Barcelona a few weeks earlier. He beat Djokovic in three sets in the final. Before that, he also took revenge on Alex Zverev, whom he had lost to in Madrid.

This year “Rafa” is in the same half of the draw as Novak Djokovic, as Nadal has been overtaken by Medvedev in the world rankings. This means that he could already meet his main rival in the semi-finals. Last year, Nadal dismantled the Serb in the final of the French Open in three sets (6:0, 6:2 and 7:5).

Djokovic, on the other hand, has set himself the goal of one day winning the most grand slams in history. He currently has 18 victories. So if he comes away empty-handed at the French Open while Nadal secures title number 21, that goal would be a distant dream for the time being.

The 33-year-old’s form is still capable of improvement. After winning the Australian Open in January, he lost to newcomer Karazew in the semi-finals of his home tournament in Serbia. Before that, he was beaten by Dan Evans in the round of 16 in Monte Carlo. Playing a tight final in Rome, which he had reached after two previous three-set thrillers against Tsitsipas and Sonega, will give a boost to his hopes for his second title at Roland Garros.

A candidate who could annoy Nadal and Djokovic is playing under the German flag. Alexander Zverev is perhaps in the form of his life at the moment. Zverev won the title at the Masters in Madrid in May. He managed the “biggest challenge in professional sport”: beating Rafael Nadal on clay – in two straight sets! On his way to the title, he also defeated Dominic Thiem, whom he had lost to in the final of the US Open 2020.

Besides Zverev, Stefanos Tsitsipas is in outstanding run. Tsitsipas secured his first ATP Masters 1000 victory in Monte Carlo in April. A week later, he was just narrowly defeated by Nadal in three sets in the Barcelona final. So he was in Rome, where he came close to defeating world number 1 Djokovic.

Aslan Karazew is another interesting name. Karazew was the first Grand Slam debutant to reach the semi-finals at the Australian Open 2021. The 27-year-old late bloomer recently defeated his then opponent and eventual winner Novak Djokovic in his living room at the Serbian Open. In Rome, he eliminated compatriot and world number two Daniil Medvedev with an emphatic 6:4 6:2.

Dominic Thiem, who has already reached the final of the French Open twice, is not amongst the main favourites. At least not yet. Thiem had a break of several weeks before Madrid and does not seem to be up to the intensity of the competition again. In Rome, he already lost in the round of 16 against Lorenzo Sonego, 33rd in the world rankings. It remains to be seen whether he can improve his form by Paris.

Other names that belong to the extended circle of favourites are Andrey Rublev (Monte Carlo final), Matteo Berrettini (Madrid final & victory in Serbia) and Diego Schwartzman.

Englishman Dan Evans is perhaps not one to name for the main contenders in Paris. However, the best British tennis player of the moment has shown himself in good shape in the past weeks. His best tournament was without doubt in Monte Carlo, where he reached his first ever Masters semi-final and defeated world number one Novak Djokovic in straights before. He also reached the round of last 16 in Madrid.

Four favourites for the women’s tournament

The women’s tournament often promises more scope for surprises. Iga Swiatek is one of the four names who are among the favourites. Last year’s sensational winner, who won Roland Garros as the 54th-ranked player in the world, has not had any brilliant results in 2021 up until recently.

Her impressive performance in 2020, in which she did not drop more than 4 games in any set at the French Open, nevertheless throws her name into the ring of contenders for victory. Winning the title in Rome in May at the last test before Roland Garros, she now has claimed the role of the main favourite for Paris. In the final, she did not concede a single game win to Pliskova from the Czech Republic.

Among the names to watch, of course, is also Naomi Osaka. The Japanese won the last two Grand Slams in a row (Australian Open and US Open). She has yet to win the title in Paris, and clay is not her preferred surface. Nevertheless, Osaka is striving for a hat-trick. In big matches, she has always been able to get everything out of herself.

If you go by current form, there is no getting around Ashleigh Barty. The number 1 in the WTA rankings recently won the Stuttgart Open and only failed in the final in Madrid. She emerged as a major triumphant in her last appearance at Roland Garros in 2019. It is her only major title to date.

Barty’s opponent in both the Stuttgart and Madrid final was Aryna Sabalenka . The Belarusian is in top form and won the women’s doubles at the Australian Open in January. In singles, however, she has never made it past the round of 16 at a Grad Slam.

You can watch all the games on the different Eurosport channels (Eurosport 1, Eurosport 2 & Eurosport Player). Barbara Schett and Mats Wilander will most likely lead the broadcast again, supported by various commentars.

Wherever you are in the world, here’s where you can watch. #RolandGarros

Moreover, ITV broadcasts selected games, as well as the best from the finals.