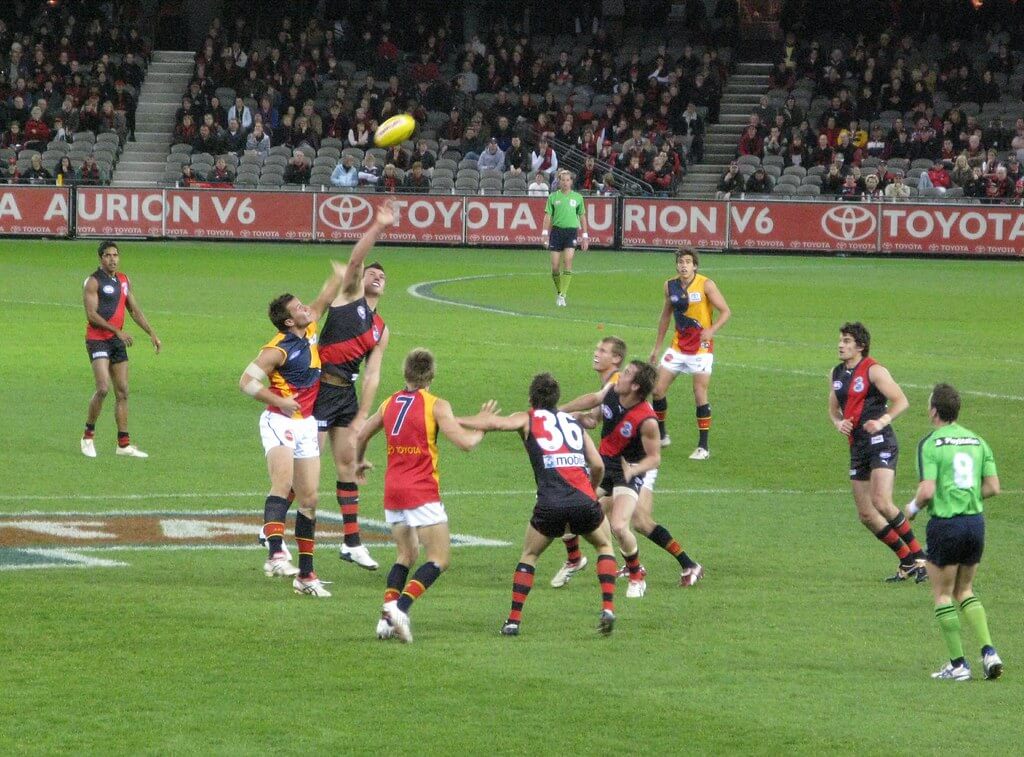 Aussie football – highlights and differences from rugby and American football

At first glance, Aussie Football might seem to be the same game as rugby or American football. However, although these sports unquestionably have a lot in common, there are some fundamental differences in how these games are played. Read on to learn more about how Aussie football came about and what makes it different from rugby and American football.

How Australian football was invented

Aussie football was invented in Melbourne back in the 1850s and was initially known as Melbourne, or Victorian rules football.

During this time, cricket was the most prominent summer sport in British settlements. But cricketer Thomas Wentworth Wills was concerned with his teams’ fitness during the winter months. He believed a rugby game should be introduced to keep his players active. Wills was born in Australia but had been educated at the Rugby School in England where he had excelled in football and become captain of the cricket team.

Wills proposed his idea to the Melbourne Cricket Club who agreed to his suggestion, and shortly after The Melbourne and Geelong football clubs were established. And since there were no standardised football rules at the time, a committee was also appointed. The committee drew inspiration from the football rules of several English schools, namely Harvard and Rugby. However, some alterations made Aussie football a different game than British rugby.

In the following decades, Australian Football quickly gained popularity. In the 1870s, thousands of spectators were attending the games. And in 1876, the first facility purposely made for the sport was built and the first game had 5,000 spectators. By the mid-80s that number had grown to 35,000.

The inception of the VFA

How the VFA came about

The depression that took place between 1893 and 95 marks an important milestone in Aussie football history. Declining attendance at the games led to the VFA proposing a revenue-sharing scheme to support struggling clubs.

This proposal wasn’t met with much enthusiasm by the leading clubs and in 1896 eight clubs came together to form the Victorian Football League (VFL).

The VFL allowed an open payment to players and reduced the player count from 20 to 18 per side. And in 1906, the Australasian Football Council was formed to regulate player movement and develop national contests.

The VFL becomes the AFL

At the beginning of the 1900s, the VFA and VFL were fierce competitors. However, throughout the century, the VFL would expand into other parts of the country and become the nation’s number one league.

In 1925, the VFL added VFA clubs Hawthorn, North Melbourne and Footscray. And in the 1980s and 90s, the VFL increased its national expansion by founding teams in Western Australia, South Australia and Queensland. The newly adopted national focus led to a name change, and since the 1990s, the VFL has been known as the Australian Football League (AFL).

Today, Aussie football is one of Australia’s most popular sports.

AFL games have the highest attendance and rank second after Rugby League as far as TV viewership is concerned. Australian is the dominant sports in Victoria and very popular in Western Australia, South Australia and Tasmania as well. The sport is slightly less popular in New South Wales and Queensland where the Rugby League is the most popular competition.

Aussie football has also gained international attention and spread to other countries such as Denmark, the US, England and the Netherlands.

The differences between rugby, American football and Aussie football

So, what distinguishes Aussie football from English rugby and American football? Well, there are several alterations to the rules that make this a unique game.

A much larger field

For starters, Aussie football is played on a cricket field, which means players cover a much larger distance. It also means the field is oval-shaped and not rectangular. To put in perspective, an English rugby field is 100 meters long and 70 meters wide. An Aussie football field, on the other hand, is 135 meters long and between 110-155 meters wide.

Perhaps the most fundamental differences are the ones concerning tackling and how the ball is handled. Compared to American football and rugby, Aussie football is a less fierce sport.

The hard Australian grounds made players reluctant to the tackling and hacking rules of English rugby, and as a result, hacking was banned from the sport. Tackling still occurs in both sports, but when a player is tackled in Australian football, the tackling team is awarded a free-kick so that the teams don’t clash for ball possession.

Players have to bounce the ball every ten meters

Another significant difference is that players have to bounce the ball every 10 meters in Aussie football. They’re also not allowed to throw the ball – instead, they must pass the ball by striking it with their fist or kicking it.

Australian football has goal posts – four on each side.