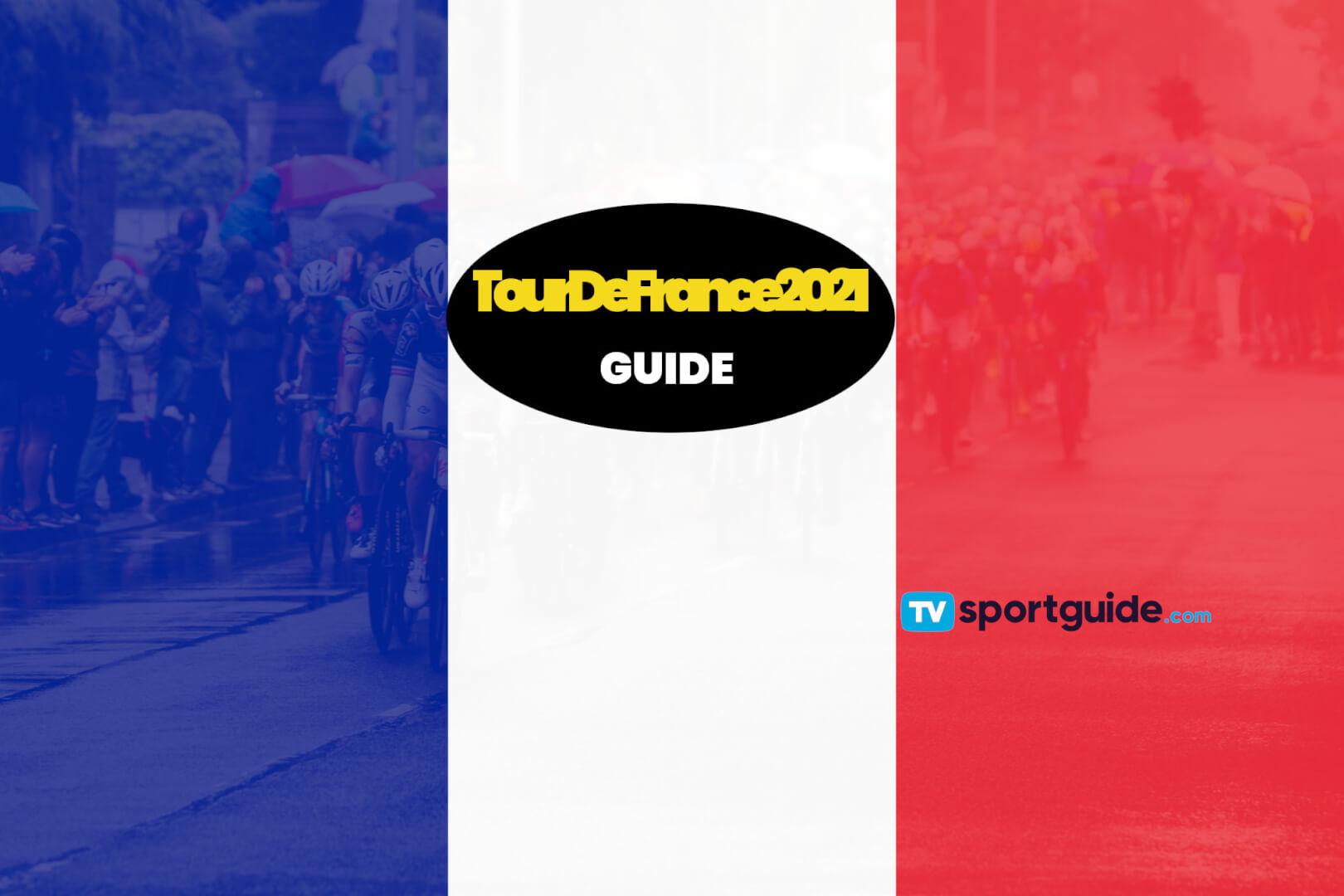 Find out everything you need to know about the 108th edition of the world’s greatest cycling race with our Tour de France 2021 guide. Fans of the sport can once again expect three summer weeks of passion, agony and excitement on the French roads. Last year’s Tour was only decided on the penultimate stage. This year, too, everything indicates that we can look forward to an exciting race.

Stay up to date with TVSportguide and follow the Tour de France on TV.

However, you should by no means expect a monotonous race. The 58 kilometres in the individual time trial mean that the mountain specialists, of which there are enough in the peloton, have to make up time in the few mountain stages.

The first real test is on day 8. During this stage, the riders have to master well-known climbs like the Col de Romme and the Col de la Colombière before they arrive in Le Grand-Bornand.

The first mountain finish awaits on the following 9th stage. Before the finish line, the rider have to survive a category 1 climb in Tignes. Due to a massive landslide, the pass unfortunately had to be temporarily closed two years ago.

One of the biggest challenges of the year is on the agenda for the 11th stage. Then the myth of Mont Ventoux has to be crossed twice! Further demanding days await in the Pyrenees. For example, on the 17th stage, which ends with the climb to the Col du Portet. Just one day later, it’s time for the final mountain finish to Luz Ardiden.

The penultimate stage is the last chance to turn the tide. The individual time trial over 30.8 kilometres offers the perfect set-up for a drama like the one we could marvel at in the 2020 Tour de France. Back then, Tadej Pogacar snatched the yellow jersey from compatriot and friend Primoz Roglic, who was actually considered a better time trialist.

We have taken a closer look at the biggest favourites for the overall victory at the 2021 Tour de France. The main protagonists of last season are in focus again this year: many experts are waiting for another battle between the two Slovenian superstars Primoz Roglic and Tadej Pogacar. Behind them lurks a strong Ineos team, which will try a more attacking tactic this year. Movistar will also compete with three classement riders.

Tadej Pogacar
The reigning Tour winner, just 22 years old, is one of the favourites again this year. Tadej Pogacar showed last year that he is extremely resilient in the third week of a Grand Tour and can also shine in the final individual time trials.

This season he has already proven to be able to perform on a top level again. Among others, he won the UAE Tour, Tirreno-Adriatico, the Monument Liège-Bastogne-Liège ahead of Julian Alaphilippe and most recently the Tour of Slovenia at home.

Primoz Roglic
You’d have to have a heart of stone not to feel a little sorry for Primoz Roglic when he lost almost two minutes to Pogacar on the penultimate stage last year and let what he thought was a sure Tour victory slip away. The Slovenian veteran, however, did not let this get him down. Only a few weeks after the biggest setback of his career, Roglic proved a mental strength rarely seen in professional cycling, winning Liège-Bastogne-Liège and the Vuelta, two of the most important races of the calendar.

This year, Roglic opted for a somewhat unusual preparation for the Tour. After Liège-Bastogne-Liège at the end of April, he did not race for about 2 months. The plan might be to be fresher in the third week of the Tour and to avoid another collapse on an important stage.

Last season, Roglic’s Jumbo Visma team was immensely strong. They controlled the race from start to finish. But can the team do Roglic such a service again? The most important helpers, Steven Kruijswijk and Sepp Kuss, have not yet been able to present themselves so strongly in 2021. Wout van Aert recently underwent surgery, so there is also a big question mark behind the Belgian.

Geraint Thomas
The British hope and nominally biggest challenger to the two Slovenians is the 2018 Tour winner – Geraint Thomas. The 35-year-old has made an excellent impression this year with victory at the Tour of Romandie as well as podium finishes at the Tour of Catalonia and most recently at the Critérum du Dauphiné.

Whether the Welshman can keep up with Roglic and Pogacar in the mountains will be one of the most exciting questions of this year’s Tour. After all, Thomas is travelling with by far the strongest team: Besides Richie Porte, who finished last year’s Tour on the podium, the squad also includes former Giro winners Richard Carapaz and Tao Geoghegan Hart.

A team that is too strong to have only one leader. This could turn into a problem for Thomas. For one man in particular is knocking quite vehemently and persistently on the door of the captaincy.

Richard Carapaz
Richard Carapaz. The 28-year-old is frenetically celebrated by the accompanying fans from Ecuador at every one of his races. Carapaz has made an exemplary development into a world-class rider in recent years.

Even when he won the Giro in 2019, he originally arrived as a co-captain. However, through an aggressive and courageous riding style, the climbing specialist has emerged as a much better classement rider compared to the actual captain, Mikel Landa. In the end, he also relegated a Primoz Roglic to the ranks in the race and secured his first Grand Tour victory.

This year, Team Ineos seems to be in a similar scenario. Carapaz recently won the Tour de Suisse with aplomb and could be the only man at Ineos who is on the level of Pogacar and Roglic, or even above, in the mountains.

The “locomotive of Carchi” had already caused a sensation in his first Tour in 2020. Although his form peak was originally set for the Giro and he only made the Tour squad due to a team bottleneck, he thrilled fans with countless attacks, two second stage finishes and second place overall in the mountain classification.

Also unforgettable was the moment when he rolled into the finish line arm in arm with Kwiatkowski after a two-man escape and gave his teammate the stage win. A few weeks later, he led his team as captain in the Vuelta and ended up second overall, just seconds behind Roglic. In the mountains he overtook Roglic several times and only had to admit defeat because of the time trial and the bonus seconds Roglic had collected.

The time trial will also be the biggest problem for Carapaz in the Tour 21. On the other hand, he could be the main beneficiary of the offensive team strategy that we can expect from Ineos in the 2021 Tour de France.

Besides the Slovenian duo and Ineos, there is another team that wants to make a splash. Movistar, similar to Ineos, is competing with two nominal captains. The first is their new transfer Miguel Ángel López. Last season, Lopez was the only rider who could at least partially parry Pogacar and Roglich in the mountains. However, the “Superman” has glaring weaknesses in time trials, which already cost him the podium in 2020. Second leader is Enric Mas, who finished fifth overall last year and has developed into a serious GC rider at only 26 years of age. Veteran Alejandro Valverde will be their main domestique. The 41-year-old is currently experiencing his Xth racing spring. Most recently won a mountain stage at the Critérium du Dauphiné.

While Movistar is also known for an aggressive strategy, Rigoberto Urán is considered to be consistency personified. Uran prefers long, steady climbs, rarely attacks and is a good time trialist. These tactics earned him second place overall in the 2017 Tour. In addition, he finished in the top 10 in all of his last five Grand Tour participations. In the Tour de Suisse, he finished second behind Carapaz and won the individual time trial on top of that.

The German team Bora-Hansgrohe may also add some action to the Tour. Emanuel Buchmann, fourth in 2019, shares the captaincy with Wilco Kelderman. Julian Alaphilippe is also back in the line-up. However, it is still unclear whether he will ride for the overall classification or focus on classics stages. Other candidates for the top 10 are Simon Yates, Esteban Chaves, Guillaume Martin, David Gaudu and Michael Woods.

Not to forget the “old guard” around Vincenzo Nibali and Jakob Fuglsang. Both are preparing for the Olympic Games and will be chasing stage wins at the Tour. Lastly, one can also be curious about Nairo Quintana. The 31-year-old has disappointed regularly in the last Tour years and seems to have his best days behind him. Four-time Tour winner Chris Froome is also making a comeback after a three-year absence. However, his results in the last few months suggest that he will not have much to do with overall standings.

Last year’s winner of the points jersey, Sam Bennett, will not take part in the Tour this year. The big favourite is therefore the seven-time winner of the competition, Peter Sagan. Although Sagan has declined somewhat in recent months and years compared to the past, the Slovakian is always good for a stage win. He can be involved in the bunch sprints as well as win somewhat more demanding stages from a smaller group.

The same can be said about Arnaud Démare. The French sprinter is making his comeback in the Tour after three years in which Groupama – FDJ relied heavily on Thibaut Pinot. Pinot is not competing in the Tour this year. This gives Démare the chance to race for stage wins of his own.

Caleb Ewan, Giacomo Nizzolo, Sonny Colbrelli, Michael Matthews and Mads Pedersen are also candidates who are eyeing the green jersey and will be well up front in the sprint stages.

Mathieu van der Poel is riding his first Tour de France. However, Tim Merlier is also in the squad from Team Alpecin-Fenix. Merlier is likely to be their target rider on the flat stages. Mark Cavendish will also return to the Tour. The Briton stepped in at the last minute as a replacement for Bennett, who is still ailing. Cavendish has five victories to his name in 2021 after a long dry spell. To what extent he is a serious contender for a stage win remains to be seen. Another stage win would be his 31st in the Tour.

It is difficult to make a prediction for the jersey of the best mountain rider. Often the competitors stand out situationally after the first mountain stages. Last year, for example, the polka-dot jersey was won by Tadej Pogacar, although he was primarily riding for the overall classification. Since there won’t be so many mountain finishes this year, one can expect that riders from the second row will have a duel for the popular jersey. Riders like Julian Alaphilippe, Warren Barguil, David Gaudu and Guillaume Martin are potential candidates.

Due to his still very young age, Tadej Pogacar is the natural favourite to win the best young rider’s jersey again. Gaudu, Aurélien Paret-Peintre and Sergio Higuita could emerge as his main rivals.

As usual, the Tour de France can be followed on Eurosport. In addition, TG4 and S4C will join in daily in the afternoon with the finals of the stages.

Learn more about the Tour de France and its broadcasts here. Who is your favourite for this years’ Tour?